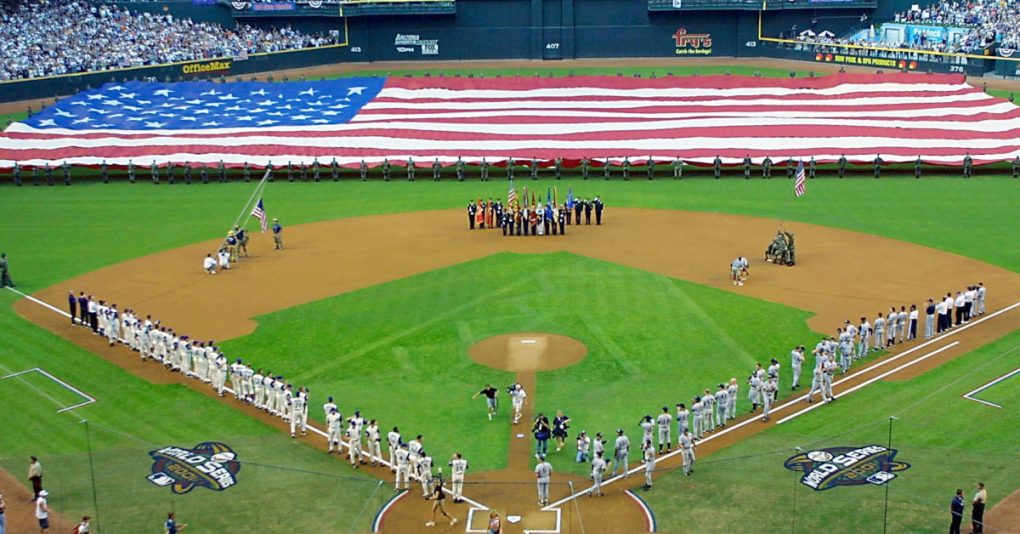 It had been a long hot summer, many races had been close.
Several teams were in the hunt, I wondered who would give their most.
As the Oakland A’s got hot, I started thinking they would win,
but you can’t rule out the Yanks, they always manage to get in.

They fought hard throughout the playoffs, and twice, nearly went down.
Both Seattle and the Oakland A’s wanted to wear the crown.
It took courage and fast fortitude, a dash of home field magic,
in the end the Yankees waxed alone; Seattle’s wane was tragic.

Rising next, up from the National, coiled a nasty snake,
a team from western desert, just a new-born for Pete’s sake.
But this deadly Diamond rattler had a pair of fearsome fangs,
and they lusted for some Justice and all the New York gang.

When the pundits had all sworn that Arizona now would rule,
they said, “Pitching is the Series king, so don’t you be a fool.
Anyone who bets the Yankees, should reap some ridicule,
so put your money on the Diamondbacks in every office pool.”

Armed with Randy, the Big Unit, and Curt Schilling pitching long,
all the arguments for victory seemed statistically strong.
They had pitched like fiends on fire, either worthy being ace.
They could shut down any hitter, throwing heat right in his face.

Still, the Yankees had their pride and they had won this thing before,
and their legendary stadium wore championships galore.
Other teams had come into their house and tried to win the war,
yet, for three straight years, the Yankees won — now they wanted four.

When the Series had begun, Arizona had first court.
Yankee killer, ace Curt Schilling took the ball and held the fort.
Game 2 was even worse, with Randy Johnson on the mound,
blanking Yankees for nine innings, batter up and batter down.

So the diehard Yankee fans had plenty cause to feel self pity,
when the Series finally made its way to wounded New York City.
Did that Yankee magic dissipate when terrorism struck?
Did the toppling of two towers mean the Yanks were out of luck?

First a patriotic song was sung, our fractured flag still flew,
New York breasts were swelled with pride, wishing what their Yanks could do.
Throughout, the game was close, and it stayed that way all night.
Thank God, and Yankee pitching, for a one-run win tonight.

In the fourth game came Curt Schilling, he was certain for Cy Young.
If the D’backs got a W, all Yankee hope was hung.
For seven innings Curt was dominant, he mowed down all their best.
He reluctantly relinquished to the closer for the rest.

B-H Kim closed out the eighth, killing Yankees one, two, three.
In the ninth, one Yankee reached, but Arizona still felt glee.
It was bottom nine, two batters out, when Tino grabbed some ash,
just one pitch and then, unthinkable, he tied it with a smash.

In the tenth came Mariano, Yankee closer, with his best,
Three up, three down, said Mighty Mo, and sent them all to rest.
When the clock struck 12:01, and baseball welcomed in November,
Derrick Jeter went the yard and made it one we’d all remember.

Now the teams stood 2 to 2, tied together in their quest,
and the Yankee hopeful dared to dream of rising to the test.
New York had Mike Mussina, Arizona just a kid,
but either one could close the coffin, and hammer down the lid.

Both did battle for the banner, both had plenty of good stuff,
but when the eighth came to a close, the Yanks had not enough.
Arizona looked unbeatable and lead them 2 to zip.
Surely, Kim can hold a two-run lead, I heard the pundits quip.

Only three more men to punch out, he was master of his fate.
One got on, but two went quietly; one last stood at the plate.
Digging in was Scotty Brosius, to take one final chance,
then he crushed one past the outfield wall where fans began to dance.

All those fans who had been breathless, let loose a deafening cheer,
he had tied the game at 2 and once more saved the Yankees’ year.
Praying hard to Yankee Destiny, Skipper Joe knew what to do,
from the bullpen Mariano marched; the crowd felt deja-vu.

Through the tenth, and then eleventh, all the batters’ bats stood still,
until the bottom of the twelfth, when Knoblauch thawed the chill.
Then the rookie second baseman nailed a slider into right,
and Knobby raced around to home — the Yanks had won the night!

In the sixth game Randy Johnson dueled with Yankee, Andy Pettitte,
both determined for the prize but knowing only one could get it.
But the Diamondbats exploded, raining hits like desert hail,
12 to nothing, after three, the score, with Yankee pitchers pale.

There was nothing Yankee fans could do, short of look to heaven,
with the Series knotted 3 to 3, it had to go to seven.
And with Schilling for the final, Arizona was home free,
but, take care to bet the house against that Yankee Destiny.

Now the Yankee boss, Joe Torre, sent his warhorse to the mound,
22-game winner, Clemens, hoping his sore leg was sound.
Both the pitchers brought their A game, neither team could get much done.
When it started raining after six, the score stood tied at 1.

In the seventh inning Schilling still looked like he had his heat,
’til that pesky Soriano golfed one into the right field seats.
Through the eighth, and half the ninth, the Yankees held that one run lead,
and it looked like Yankee Destiny was all that they would need.

But the Arizona Diamondbacks had yet another plan,
first they tied it with a hit, then all the bases had a man.
And when Luis Gonzales drove in one more final run,
the New York reign was over — the Diamondbacks had won.

Yet, while New York hearts beat heavy, they most certainly beat loud,
for the boys from the Big Apple had done the Nation proud.
With a nation steeped in worry, they proved entertaining pause,
so perhaps that Yankee Destiny just serves a higher Cause.

While I must admit I mourn the end, the irony’s apropos,
it took Diamondback twin towers to take victory in the show.