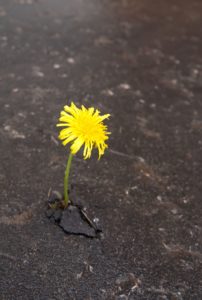 As the day meandered slowly in a drab grey uniform
The lemming-certain soldiers marched fervently to war;
Plodding rhythm robots, more machine than men alive,
Like a swarm of silent drones on a mission from the hive.

The soulless thumping beat of boots, first left then right in sync,
Every step a tally, one more life pushed past the brink;
They’re fighting for philosophy, a cause meant to ennoble;
Yet the bodies pile up higher as a monument immobile.

Us or them defines reality, and blinds the soldiers’ eyes
To the men behind the curtain, or the truth that underlies;
Like a foggy morning mist that has not lifted from the land,
Shrouding faces from each other, when death is close at hand.

Misshapen words and rhythms speak of hostile enemy thought,
Alien shapes and sounds that conjure demons to be fought;
Distinctly different uniforms accent targets in the brawl,
Until the common color of war makes blood-brothers of us all.

The many-headed hydra snaked blindly along the road,
Flanking tanks and armored cars, every weapon lock and load;
When the caravan of ruin climbed a rise and then slowed down,
A single soldier paused as his gaze dropped to the ground.

He saw a single dandelion had poked a defiant head
Up through unforgiving asphalt, barely missed by heavy tread;
Its bright yellow petals promised peace for just a while,
Life lives, thinks one soldier, who comes alive and starts to smile.

“Back in line!” the sergeant barked, and stepped squarely on the plant,
We’re needed on the battlefield with Death our only chant;
With a hardened heart the soldier seemed to melt back into line,
And the caravan continued toward its devilish design.

An hour down the road they could hear the nearby fire,
Just a warning prelude to the hell that would transpire;
Soon they broke from rank and file and scattered to the wood,
A rain of shells exploding in the spot where they had stood.

With forest cover the soldier hoped out of sight meant out of mind,
But the enemy had been waiting up ahead behind a blind;
When he stopped a sec and squinted to adjust his darkened sight,
He went from upright to supine in a blinding flash of light.

“MOVE IT! MOVE IT!” said the sergeant, though he wasn’t even there,
“Be a man,” said his father from his favorite easy chair.
“I just knew it,” cried his mother with her hands upon her hips,
“Shouldn’t take this lying down,” were the words from his own lips.

Then he noticed something wet beneath his arm and turned to look,
What had started as a puddle was becoming a red brook;
As the blood poured from his wounds, and his face turned ashen grey
All the fear and hate and pain inside began to drain away.

He smelled the piney sap that oozed from every single tree,
And heard the friendly song of birds, and a busy buzzing bee.
Only inches from his head a dandelion stood still awhile,
Life lives, thinks one soldier, who comes alive and starts to smile.

Slowly he rose above the fray, floating softly on the air;
He saw so many fallen feeling death’s desperate despair.
Soon the tops of trees were underfoot, tickling the bottom of his soul;
And suddenly he giggled as he loosened all control.

There were armies to the left and right, straight ahead another two,
Life could end this day in battle, once and done, for all they knew;
Who was right he could not say, but there was one thing he did know—
There just wasn’t any reason to the battle down below.

If they’re fighting over food then they ought to grow some more,
If it’s pride that needs repair, why not a building to restore,
If it’s honor that they seek, why not the honor of being kind,
If you’re killing to survive, you’re most certainly out of your mind.

Out far across the plain he sailed, warming in the sun
Still he wondered to himself, whether deeds were left undone;
Then he saw the yellow dandelions, stretching many a mile,
Life lives, thinks one soldier, who comes alive and starts to smile.